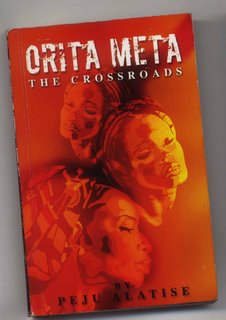 IT is an on going thing for parents to search for names that best describe the ambience or situations that precedes the coming of a child. Oluwaremilekum, is one of such names; “Today you are without tears, Oluwa ti re e le kun. Yes, he has wiped your tears. Oluwaremilekun, it is true that the Lord has put a rest to my tears.”
Oluwaremilekun is the child that stayed alive, unlike the six others before her. She is the lead character of the book Orita Meta, a novel that tells a story of three particular women in different journeys, who ended up at the same destination : An understanding of life’s challenges and self-discovery as a woman.
Oluwaremilekun the lead character, is a child with an interesting future. An intelligent girl who showed interest at a very early age, in handcraft, at the age of self-discovery and the understanding of love, her pride got stolen from her.
The story of Orita Meta – The Crossroads, is a mixture of poetry and prose, blended with wise saying and beliefs of the Yoruba land.
Written in a clear and concise pattern, Alatise takes the reader through pages that reveals the elements of Oluwaremilekun, as she struggles with her secret and marries her heartthrob. And just like the prologue tries to prepare the reader early enough, she bears sons, whose existence is necessary for the introduction of the two other lead characters, Cecilia, and Omolabake.
In as much as the book is an easy read, the reader encounters a little puzzle that helps to keep the page turning, after the war that tears Oluwaremilekun, and her village; a war that leaves her a widow, forces her to sell one of her sons into slavery, for the existence of the others.
This little puzzle sets in just at a time when the first part of the book comes to an end. In beginning the second part of the book, the reader is forced to question if the book is that with three different stories, for the first part, was all about Oluwaremilekun.
The second part of the book introduces the reader to Cecilia. A child born and abandoned by her parents, because she is born with a cleft palette. Raised by the doctor who birthed her, an older Cecilia soon will become the subject of a fight between the doctor, her foster mother, and her parents.
Cecilia did not have an easy childhood because of her condition. Tongues wagged behind her, and no man would marry her, even when she was at the right age. Ordinarily, Cecilia would not have bothered, because she was loved by one, whom she loved in return. But he was far away and her mother tried to make her see why she couldn’t wait. Her mother tried to make her accept the position of a second wife, just because she and her husband wanted to enrich themselves with the bride price. But true love, regardless of her cleft palette, saved the day.
At the end of the second part of this book, the reader, who has almost forgotten about Oluwaremilekun, meets her again, as gradually her lost issues begin to fill the empty spaces that had been left open in the first part.
Now the book gets more interesting, as the writer takes the reader through a world of anticipation that ends in a perfect climax, as the answer the reader carried from the beginning of the book, gets answered, at last.
With Orita Meta, Peju Alatise has accomplished what most writers, wouldn’t have easily. Her ability to weave three parts of the story, and yet hold the reader spellbound, is what transforms into a bestseller.
In all the brilliance of Orita Meta, there are several unanswered questions in the 208-page long book. Not once, but twice, a narrator was introduced. In the first part of the book, the narrator was introduced at the end. The narrator was a female, who got to meet Oluwaremilekun, through a visit to the market place to weave her hair. The narrator returned again, almost at the end of the second part, this time as a journalist, sex unknown, and disappeared from the book. What then was the narrator’s role in telling the reader a story that is already known?
Furthermore, the question of the narrator aside, Peju Alatise’s ability to even join the third part of the book, that told a story of Omolabake, to the other two, was done with expertise, because the readers never really would have foreseen the turn of events, because the mother in-law Omolabake paints to the reader, is entirely different from the woman the reader knows, and had come to love.
There was no better way to end the story. No writer would have done it different, and succeeded. As the book comes to an end, the reader wishes it would continue. Peju Alatise, with her strong sense of imagination knew when to give back to Oluwaremilekun, what she took from her in the beginning. The writer knew how to tickle the reader’s imagination, because eventually, the reader understands that at some point in Oluwaremilekun’s life, the other two characters, began to exist, in different backgrounds, but the same time frame.