A CAUSE FOR CHARITY

March 26, 2007
This programme held on February 18 at Terra Kulture Lagos, when YPI, Young Professionals Impact, collaborated with Crown Troupe and Terra Kulture for the Bukhateria show.
While I am a part of YPI, I also covered the event and reported for my paper, National Mirror, and this was how it appeared in the paper.


When people gathered to enjoy the performances of stage artistes on the third Sunday of the month of February, it was more than just entertainment that was happening. It was also new hopes for some children somewhere. It was an evening that saw the ‘Crown Troupe of Africa’ mount the stage again, as they have always done on the third Sundays of every month. Bukhateria No. 12 was more than the usual Bukhateria because the original organizers where joined by Young Professionals Impact (YPI). The audience came prepared for an evening of exciting performances, and where not disappointed as one artiste to the other succeeded in inviting reasonable applause from the audience. The show began with an opening performance by Footprints, a theatre group of five young people who thrilled the audience with their choreographed dance play to put them in the mood for the rest of the activities yet to come. Taking over from them are The Goodies Flavour Melody. Then came Aro-Merin, as they performed the jazz side of a popular track by Asha. They were in their performance, able to hold the complete attention of the audience, who listened with rapt attention and possibly nostalgic feelings. Quickly bringing the audience back from the melody of divine feelings, Oteega, the MC, couldn’t stop cracking jokes. Soon enough, he explained the reason of the gathering. In as much that ‘Crown Troupe of African’ has always done the Bukhateria show every month, it was a welcoming plan to do a show that was totally dedicated to charity. The Young Professionals Impact (YPI), is a non-governmental organization that comprises of young professionals, employed in different fields, who came together, because of the common dream they have to help the less privileged ones in the society. YPI’s ‘Live The Dream’ project involves a series of activities that will enable the body to raise funds for charity, as well as take up the responsibility of sponsoring the education of certain children. 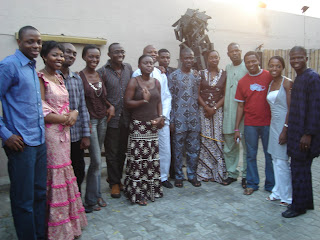 Their decision to join ‘Crown Troupe of Africa’ and ‘Terra Kulture’ in organizing the Bukhateria No. 12, is to enable them have a beginning for the task ahead of them, since some of the activities the organization plans to initiate, includes art presentations such as exhibitions and drama presentation.
In that note, the creative works of the evening was of interest to the organization whose project Live The Dream will also encourage young ones on living the life that is right for them, a life they dream of and which can be achieved through the various talents that God has given to them.
‘Crown Troupe of Africa’s first performance of the night titled ‘Cycle’ is written and choreographed by Segun Adefila, the leader of the group. Basically, what the contemporary dance piece tries to convey out to the audience is the fact that there is nothing new under the earth: ‘follow a print and leave a print as done by those who lived before’. They chanted, as they described through well choreographed steps, how it is important to live a life that is meaningful, so as to be remembered for the good addition to the generation of a people.
Another highlight of the night was by four little boys who knew how to speak with their drums. Ironically enough, they go by the name of Drummer Men. To the delight of the evening, they played a popular commercial track called ‘Baby Konga’.
Humour unlimited was also part of the occasion. Not to forget the fact the Oteega, a popular stand up comic was the MC of the evening. Wherever he stopped, Oteega was soon to bring on stage another of his colleagues (soul snatcher and Kofi), to help brighten up the occasion. Then not forgetting Salem whose song cry of the politics of the country eventually matched the main performance of the evening.
The main performance of the evening, by ‘Crown Troupe of Africa’, was Olu Obafemi’s ‘Night of a Mystical Beast’ a poetic play on trust and betrayal which tells the story of how the black man got colonized by the white man. What’s more, was the presentation of the reality in which we live in today, all in the name of democracy; the fraud of the politicians and the pledges of empty words which are never redeemed.
Although at the beginning of the play, we see the kind of community that the black man exist in, and in the contentment in all that he have. But gradually, with the coming of the white man, who artistically ridicules the ways of the black man, and leads him to lead a life different to one he knows, the believes change to accommodate what he learns from the white man, who overnight, turns from being the enemy into the friend who will loan the people money to carry out various constructions.
It is strange that when the learned children of the land tries to warn their king from listening to the deceit of the white man, the king is unsure of what to do, as there lies lots of promises by going the way of the white man. And just as commotion arises in the face of war, the king obviously in need of guns to defeat his enemies in battle, turns to the white man, who already seem to have succeeded in starting a commotion.
“This is our condition,” the white man say,” you will have guns to fight and conquer your enemies, but you will give us your men to help us fight and conquer our enemies in the white man’s land”, the beginning of slavery.
Obviously the play tries to identify who the beast is among the people for all the calamities that befall them, as unknowing all through selfish reason, they take decisions that favours themselves and which hurts the people. It is a play that intends people to think of the other person before making a decision.
At the end of the day, YPI had a successful first outing and were very grateful to all those who helped to make it happened. As all the monies raised goes to charity, the organization will soon be back to launch their project.