The War In The Sky

March 26, 2007
This write up was first published in National Mirror.

The War in The Sky
by Uzezi Ekere

Over the years, historical events have served as great inspirations towards the making of masterpiece works of literature that did more than just entertain, but helped in educating people, and even opted them to do more research on the topic, just to know more. In 2006, a fiction work on the Biafran war, Half of a Yellow Sun by Chimamanda Adichie, brought back the war into discussion, and some young people who had no idea of it, had to try to understand more. February 22 saw the birth of another work of literature, where the sun and the moon had to take centre stage as the main acts in a poetic work of drama titled The War in the Sky. The formal presentation of the 35 paged book saw a gathering that cut across the literature circle, into other fields, as people came to find out what Busola Elegbede, the author, had to offer. As it appeared, it was a lot that came in a small package. Making this discovery was only made possible, when the Onile Agbon theatre troupe, led by Amos Femi, came up to do a drama presentation of The War in the Sky. Soon enough, like the title of the book, there was soon war as the sun (queen) and the moon (king) couldn’t resist fighting each other. With a compilation of casts; Morayo Ajani, the narrator, the sun, the moon, four moon dancers, four sun dancers and four cloud dancers, the audience got engaged in the flirting and mockery of the moon towards the sun, and the unbelievably rage and temper of the sun, whom, the reviewer of the book, Chike Ofili, would later describe as having the temperament of a man, and should have been the king, instead of the queen who ruled by day. 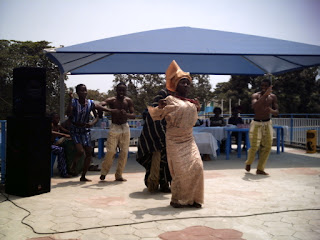 “A blinding but watchable SUN shines brightly down on Nigeria,” says Morayo. Throughout the presentation of this drama, it is obvious that both the sun and the moon are trying to show who has the more important throne over the earth. Although the sun got away mostly because of her aggressiveness, the moon has the last laugh when he was able to block the light of the sun from falling on the earth, and thus, an eclipse. 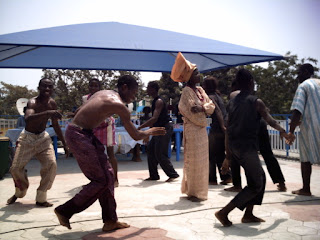 The work Busola Elegbede presented is an event which, even though happened in many other countries, is strictly based on Nigeria. Writing on the eclipse of the sun, she did justice to the constant fight between the sun and the moon as at the same time, funny enough, her work could be interpreted to address the political situation of the country, with the constant fight between president Obasanjo and his vice, Atiku Abubakar. Although the book is a work of literature, which will also serve as an avenue for entertainment, the writer sees the work of the book as going further.
"The book is the challenges Nigerians face,” Busola Elegbede said. “It’s a human experience where there will be a dark time and a time you will shine. And to deal with the misconception of what some people around here still think about the eclipse, when they regard it as a spiritual thing.” Earlier on, the chairman’s opening remarks to the audience had expressed the sadness that not enough youths were present at the book presentation, that it would have been worthwhile to have that audience, since the book is actually addressed to them from one of there own. But later on, Elegbede cleared that notion, saying the book is for everyone. “The chairman meant it in form of a school book that they could use in their studies, but it’s for everyone really because there are people who buy books just to read and enjoy. Not necessarily as a school book.” 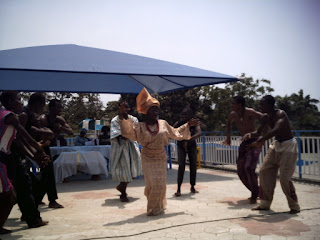 “
Elegbede who has been writing since her secondary school days, and who once wrote for her drama club in school, co-wrote a play where she played the lead actress during her NYSC in Adamawa state. “It was about two years ago that I started writing for the stage so I have been active and involved in it.”
Just like many writers, she yearned for a break, to come out and be read, but it was taking too long to happen, which then prompted her to self publish.
“A climate of the state of the book industry in this country which made the writer, the editor, publisher, event planner as well as marketer, when she should be using such precious time to nurse other creative ideas,” the reviewer, Chike Ofili said.
On the book, he emphasized that if there had been an editor, the author would have been given more light and insight towards her work. “It is my opinion that the book is a well thought out plan, but it would have needed more imaginative stretch if she had a good editor.”
Elegbede said she did seek the help of publishers and actually have some deals. “I have so many manuscripts and I am tired to looking at them, so I had to do something about this one. “I even have the synopsis of this book out for foreign publishers,” she added.
And knowing fully just what the industry is like, Elegbede has her marketing plans that she hoped will work for her. “I will take this work and showcase it as much as possible. It’s not just writing it, I’m going to dramatized it with the help of drama troupes. I plan to take it out of the country, but I’m taking it round the country first. Besides, exporting this work is part of my inspiration,” she said. “Because the eclipse brought people last year – foreigners - to Nigeria, so I decided I was going to write about Nigeria and about an event that brought people to Nigeria, which was why I chose the eclipse of the sun.”
Elegbede’s title for her book is partly influenced by the fact that her father, is a retired military man. Already, with this work, she intimated that she has been nominated for an award, but refused to talk further on it till the time is right. Already, she is working on other projects. “I write for comics and some websites, so I’m a very busy writer. But I am bringing two new works out soon. One of them is titled Despair in Her Eyes. I want people to praise and criticize.”