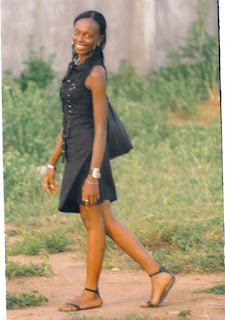 ONE
Me posing above, in school two years ago with the very first gown I ever purchased with my money.
The school that I try not to regret that I attended. Two years after, no results. Stupid.

TWO
What I love most about my face are my eyes, and I love to make them up.
Last Week Friday, I almost freaked out. I went to the salon and decided it was time for a new look. I got out of hair extensions, so my hair can breathe. Fixed eye lashes for the first time!

I was so scared. The first thing that jolted me when we began was the girl screaming at me. 'Dont Blink!'

Imagine seing something coming at your eyes and you are told not to blink! At the end, I had tears falling from both eyes. The lashes were beautiful and so real, worth the stress, but my eyes were red, and someone told me sorry later, thinking I had apolo.
Since my lashes, I imagine that everytime I pass by, people are staring at my eyes and wondering. Oh sexy!

THREE
Yesterday I Had Fun!
I don’t drink. But one in a while, I like to get tipsy. The last time that happened was December 29, where I almost emptied a bottle of Irish cream. I was so wasted I promised never again will a sip of anything alcoholic touch my lips. Then good yesterday, at my friend’s place, her fridge was well stocked and she introduced me to a cheap red wine that turns her head. I got a full glass and swallowed it in two gulps. She nearly fainted. “What? You took that like water! I’ve never taken even half of what you took.”

I smiled. “I’m cool.”
She laughed. “You are so finished. Just don’t move.”
I bragged. “I be Warri babe. Drink no dey catch (pronounced cash) me.”
And it was morning, and I’d not eaten anything. She quickly brought me bread and butter, and while eating to save my senses, so I don’t get taken advantage of to confess my past and recent sins, we relaxed watching Playboy TV.

And I used to think ‘The Girls’ Next Door, Of The Playboy Mansion that is – Holly, Bridget and Kendra were the ultimate.
Jesus Christ! What didn’t I see? Imagine all those girls, American sex star, the ones who host the private night calls, etc. It made me remember that I once had a longing to go to New York and dance on tables. I was seventeen then. And I don’t know if I still just don’t want to do that.

And my friend said there’s a club on Victoria Island, and that the owner pays his strippers very well. Ok stop! I ain’t going that far! At all! At all!