August 22, 2008
By the time Saturday August the 16th started, I was tired. Marriage is not easy o, the stress before the D-day is hell, then on the day, even with all the excitement, you just can’t wait for it to be finally over so that you can start a new life with your husband.

It began with the family morning devotion that was interrupted because the taxi that came to pick up the makeup artist to go home and change, kept blasting its horn as though announcing the second coming of Christ. The maid of honour had to take the first flight from Lagos and was early, but she forgot her second attire. Not the one for the first event though.

Then, everyone (the house was full of friends and relations who haven’t seen in a long time and who took wherever they found to lay their heads for the night, thankfully.) started working. Most of the women in the family – aunties and in-laws- were behind the house cooking, and I promised myself I will eat the Owo soup and Starch later – but that day and with everything, I forgot about food. My aunt had to carry a plate of rice and deposited it in my hand at a point.

The court marriage didn’t take time at all, from there we proceeded to a Photo world to take good pictures, by the time we returned home, the compound was transformed and looking set for the traditional marriage. 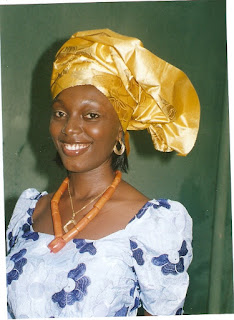 I was almost not recognised when I dressed so traditional for the first time in my life, but I got used to it after adjusting the wrapper for God knows how many times.

According to our culture, at the end of a marriage ceremony, the bride with her load, are escorted by some of her family members to her husband’s family, or the home of the most eldest member of the husband’s family in the vicinity, not the husband’s house. It is done that way to show that we have handed over our daughter to your family, and we recognise you as the eldest in the family.

Earlier in the day, my cousin had brought the very big box that will pack, if not all for the moment, most of the things that will go as load during the escort to the husband’s family.

By the end of the day, the compound was emptying, the rain was back and I was packed and ready to go.

And the journey back home to Gambia... hmm... I mean Lagos, was hassle free, compared to the journey from Lagos to the Niger Delta.

Happy Married Life to my sweet cousin Evi, and her sweetheart. I will get there someday.