August 06, 2008
I had absolutely no interest whatsoever in The Gambia, until I had no choice, but to be interested because at the moment that is where my heart lies. No! Not with the country.
Having a new found interest in The Gambia, made me open my map of Africa, then focus on the West Africa country that is smaller than my beloveth Lagos. Before going, The Cave Man had tried to impress me about the place and how much I will fall in love with The Gambia and the peace and quiet. I didn’t believe it of course. Lagos and I are still enjoying our transgressions.

One friend told me that the place is a great tourist attraction and that the country makes a lot of revenue from tourism. I visited their website and saw that much. The website also made me understand that certain things couldn’t be purchased there, so you have to come prepared.

The Gambians are very dark in complexion compared to us, but they appear very peaceful and the place is peaceful. So peaceful to the extent that it’s kind of boring when it isn’t the tourists’ season which begins from October to April.

Their major mode of transportation is a yellow and green taxi. Another kind of taxi, a green coloured one, is used only by those who work in the tourist area, just like we have different taxis at the airport.

One very intriguing thing is how most white women seem to love Gambian men. In the street I stayed was a bungalow occupied by a Briton woman, 72, married to a younger Gambian man. My neighbour where I stayed had a white chick. Age wise they looked okay, and I learnt he just returned to the country. Apparently he was in obodo oyibo. I heard what I saw was small compared to how it is during the tourists’ season. And most of the guys who attract some of these white women are Ras Kimono’s cousins. Hair locked to eternity. When you see guys like these around town, know one thing, they are tour guides. Tour guides wear locked hair and majority are also the taxi drivers of the green cabs and their passengers are only tourists. 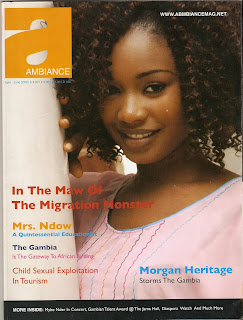 Their girls are beautiful sha, though I wasn’t impressed with their hairstyles. A Nigerian hairdresser should go and open shop there.
Majority of their girls have hips. Even the young teenage ones. The Cave Man told me when their girls are born, beads are worn on their waist so that when they are growing, the growth of their waist is limited, that way, they have big hips and very tiny waist.

Unless you are someone who loves to experiment with food, if you are going to Gambia, go prepared. Their dishes in their restaurants are something else; I enjoyed only one and that was because it was white rice and shrimps. Oh, and I enjoyed their kind of suya too. They don’t call it suya and it is lamb meat, barbecued when you order for it, and served with onion.

I went to Bakau market because I wanted to cook. I noticed fresh fish is so very cheap and I regretted why I didn’t travel with spices for peppersoup. I bought rice I cooked but couldn’t eat because it tasted strange and the grains were shorter. I was told Serrenkunda market had more Nigerian food there, but I didn’t have the opportunity to go there.
Fruits are expensive. Infact, fish and transportation are the cheapest, because by the time you are buying something in their currency; Dalasi, and multiply by six to get the price in Naira, who will frown. Yes, the value of their money is higher than ours; one Dalasi to six Naira.

Lots of beach spots to visit and the environment isn’t as rowdy as Bar Beach or Kuramo. You stroll freely without concern of being attacked. But surprisingly, The Cave Man’s friend, S, whose mother-in-law is in town from Nigeria, because S and wife, B were expecting their first kid (they had a boy the day I left), had a surprise.

The Cave Man and I and another visiting friend where leaving the beach at night, and met S and family coming. We were almost home when S called to say his mother-in-law’s bag was snatched at the beach.

I refused to believe. In Gambia? With all the boasting about peace and all, I have heard? Apparently, S was telling his mother-in-law if she could imagine strolling at Kuramo by that time of night freely, without a care, when the bag was snatched and the culprit ran away.

I give it to Gambia, they have a constant supply of clean water. I would have added and electricity, because that is part of what The Cave Man boasted about, but I was there and power outage kept recurring. Anyway, it isn’t as bad as ours, and it was because they had a sort of problem.

I enjoy the way they speak English, and I envy how collected the Gambians are. There is hardly that complex situated we notice around us. They see themselves as equal to anyother person, black or white, rich or poor, and are extremely contented with how they live and what they have. For example, you might employ a Gambian and pay him wonderful salary, he might drop in one day and resign for no reason. He just doesn’t want to work. Simple. Heard their women are more hardworking.

Long and short, I enjoyed my stay. Even discovered NewAfrican magazine over there, and it has an interesting magazine insert, NewAfrican Woman. Wonderful magazine. There is Nigerian price on the cover but I have never seen it here in Nigeria. I will keep my eyes open. (Those of you in the US and UK should watch for it). 'Nice' magazine is to them what Ovation magazine is to us. And the other, 'Ambience', made a nice read.