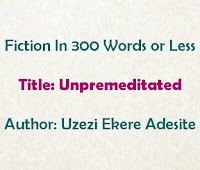 When my world died; I became the law.

I was thirteen when our neighbour, Benedict, raped me. The matter never became a case. He convinced my parents he would marry me after my secondary school education. To avoid the shame and stigma of rape, and because Benedict could afford to give them some money, I became his sex slave. My parents said I was Benedict’s property in waiting.

My daughter was born in my parents’ house when I was sixteen. I tried to run away with her to avoid moving in with Benedict but my father gave me up. I tried to protect her, but unfortunately, she was a silent and sad witness to my life. I tried to be happy for her though and gave her hope for tomorrow. I loved the belief I saw in her eyes when I showed her the vision. It inspired me to find a way for us to escape because there was no one who would help us. The law wouldn’t either because Benedict bribed the police away the only time I mustered the courage to report.
The day I threw all caution to the wind was when I returned from the market and found our daughter cowered by the wall, shivering and crying. All the courage I had built in her, gone. One look at her and I didn’t need to ask her any question. Like a wounded lion, I charged out of the room in search of him and pounced on him with all my might. The neighbours eventually got me off him but by then, he had suffered a heart attack according to what the doctors said. All I could think about was justice for my daughter.

And now, and now, the law is about to come into play. Guilty.