Prince Emeka Obasi is set to unveil and release his latest book on the rising menace of fake prophets and prophecies in many churches in Nigeria. 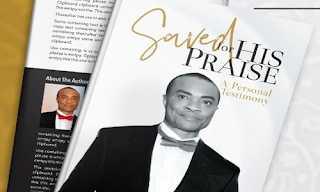 The over 300-page book is a true-life story of how GOD in His infinite mercy and power, delivered him from a mysterious illness and premature death in the wake of allegations and fake prophecies of occultism levelled against him by his brothers and sisters, in concert with the pastors of their churches.

The book entitled SAVED FOR HIS PRAISE is Prince Obasi’s testimony to the eternal grace of GOD upon his life; it is a no-holds barred story of the health crisis he has suffered for about four years, and how he has survived.

The book is stunning, explosive and on occasion, even incredible. It peels off the layers of the permissive culture of religious hypocrisy and the monster of fake prophecies in most churches today. By revealing in stark details his mind boggling experiences, Prince Obasi calls out this cancer in the body of Christ and alerts the public to its present and imminent danger.

This 18 chapter book is a must read for all Christians and non-Christians, especially those that are very successful in their chosen careers and businesses, as it reveals how people through manipulations by fake prophets and  prophecies, often contrive to harm those who love and help them.

Prince Obasi in a lucid and captivating narrative addresses this major challenge plaguing the church and reveals how trusting GOD and His word, delivered him from death and conniving relations, who in confederacy with false prophets, felt that his modest success was the reason for their respective failures in life and, subsequently, launched a venomous attack against him. However, unknown to them, his success as attested to by many Nigerians, is a result of hard work, diligence and creativity.

Affirming this, Reverend Unachukwu Ugochukwu, Senior Pastor Discovery Ministry, said, “Emeka, your family does not understand you. You are someone who eats with your brain, you are an intellectual; a strong ideas person. The kind of things you set up, you structured, you created a long time ago, were amazing. It is so sad when people don’t understand who they have. I wish I could sit with your family members and talk to them about you”,

In separate prayer sessions with prominent church leaders at the height of the mysterious illness that nearly claimed his life, Obasi received prayers and assurances that GOD’s intervention has secured his life from premature death.

The General Overseer of The Redeemed Christian Church of God (RCCG), Pastor E. A Adeboye, gave him a word of faith, “Emeka, your testimony will be heard far and wide”. Reiterating Pastor Adeboye, the General Overseer, Mountain of Fire and Miracles Ministries (MFM), Dr Daniel Olukoya, declared that “the name of the Lord shall be glorified in you”. This was re-echoed by the Senior Pastor, Christ Livingspring Apostolic Ministry (CLAM), Pastor Wole Oladiyun, who affirmed, “This is for His Glory. In the end, the Lord will make a name for Himself and He shall be praised”.

In the foreward which he wrote to the book, Dr Olusegun Mimiko the former Governor of Ondo State said, “Saved for His Praise is a very touching and deeply instructive book. It is a profound testimony of God’s abiding mercy. For everyone seeking His mercy, and even for all who have been touched by it, it is deeply inspirational and a worthwhile read”.
Attesting to and professing his allegiance to JESUS CHRIST for His power and sovereignty over life and death, Obasi affirmed thus: “Jesus Christ is truly the way, the truth and the life; no one who believes in Him shall be lost, rather he will have life even more abundantly”.

Many Nigerians from a broad spectrum of the society are expected to attend the presentation of the book on Saturday, August 18, 2019 at the Nigerian Institute of International Affairs, NIIA, Victoria Island, Lagos.

Prince Emeka Obasi was born in Umuahia, Abia State. He studied English at the University of Calabar. He has worked as a reporter, columnist and newspaper publisher. He has variously served as Special Adviser, Media, Research and Strategy, Hon. Commissioner for Information, Culture and Tourism, Abia State and has been a consultant to many State Governments. He set up Hallmark newspaper in 1998, National Mirror in 2005 and Business Hallmark in 2009. He has helped in structuring several institutions of local and international repute. He is versatile, creative and enterprising and is actively engaged in entrepreneurship, policy analysis and public relations consultancy. He is married to Dr. Mrs Elizabeth Mankini Emeka-Obasi, a pastor of the Christ Livingspring Apostolic Ministry (CLAM). They are blessed with children.